Yes, Tuesday was the day the rain came down and oh boy did it come down!! The wind blew hard and swirly, and the rain was so heavy we couldn’t see across the road.  It was just like peering through fog! And it went on…. 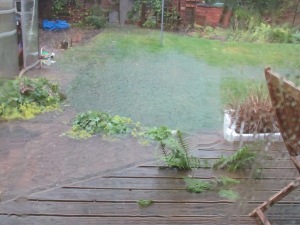 This part of the garden often gets a puddle but not quite this big! We started feeling a little ooer – if you know what I mean, and then it was a bigGER OOOER!!

At this point we donned our coats and boots/sandals to check the front of the house.

Yes we were in for a paddle!  This amount of water took all of 15 minutes, no exaggeration!  I mean 15 minutes. Can you see the blue bricks?  The water was just lapping the bottom of the air bricks.  So we paddled out and round to the driveway.

The manhole drain covers were just starting to pop and still it kept on raining! 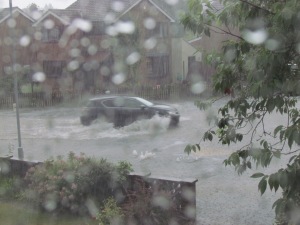 The few cars that were out and about were driving very slowly!  This is a four by four and the depth of the water was well up the sides of the wheels.  Twenty minutes now!  Back outside we went to try and do something.  The same as everyone else.  Grabbing pieces of wood to try and divert the water. Remember King Canute?!!

Remember the blue bricks?  Well this is the area in front of them filling up nicely.  At this point the rain was slowly stopping.  Ahhh look at the pretty waterfalls – my foot!!!

After about thirty minutes the rain had stopped but the water kept on rising.  Gone are the air bricks and the blue bricks. Another cm and it would be over the doorstep.  Our neighbour did a fantastic job of blocking her drive gateway and so stopped the run off into our garden. 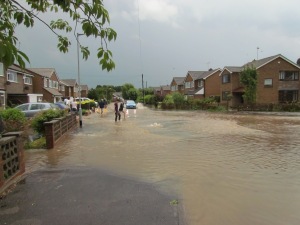 Water, water everywhere…. The road at its height was knee deep and the current was amazing!  Cars were making bow waves and being abandoned elsewhere.

This was our neighbour’s house, just before the water started to subside. 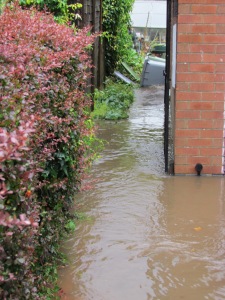 This is the side of our house.  Yes they are the dustbins floating around!!  We were very fortunate.  Yes, our house smells damp, yes the fitted door mat has stretched, yes we did get about 6 inches in the garage,and yes it did have sewage in it, but friends were flooded for the second time in 6 years.  They had all the water barriers fitted to all the doors and french doors to a height of nearly 3 feet.  And they held, until the water rose above them and in it gushed. They were flooded to the height of the windowsills.

At least 50 houses were flooded according to today’s Telegraph. Have a look on page 8. I bet it was a few more.  If you add in all those houses affected like ours, it will be way over 100.  It will be months before things are back to normal for them all.  All we can do is help and support them some how.

A Christian Mum who crafts
View all posts by alisonb2 →
This entry was posted in Camera, Flooding, Gardening. Bookmark the permalink.