Across the road from the Guest House is the marvelous sight of David’s Tower/Citadel.  At the end of the 1st Century BCE Herod the Great built a large palace on this area.  It is probably to this palace that Pilate sent Jesus to Herod Antipas.

“When he (Pilate) learnt that Jesus was from the region ruled by Herod, he sent him to Herod, who was also in Jerusalem at the time.”  Luke 23 v7

The bottom courses of stone are from Herod’s time.  He built three large towers to rise over the city and the view today is breathtaking.  The old city of Jerusalem is small and can be seen in its entirety from the viewing platform at the top of this tower.  We just stood and marveled at the sight.

You could say we were ‘gobsmacked’!!!

The photos do not do the view justice.  The sun was extremely bright and the first thing you saw was the dome on the Temple Mount.

Behind are the seven golden onion domes of the church of Mary Magdalene built by Tsar Alexander III in 1888.  Even Barnaby was stunned! 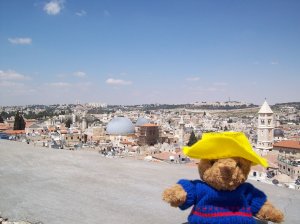 Today, the citadel that you see dates from the Crusades, and houses a museum of 4,000 years of the history of Jerusalem.  Imagine being in and surrounded by so much history!! 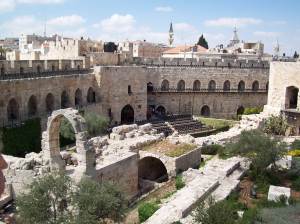 These two pictures show the inside walls of Herod’s palace, with newer stones on the top.

The exhibits, completed to a very high standard, show the work of the Romans

and their mosaics and standards, 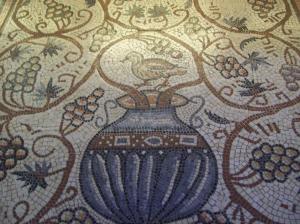 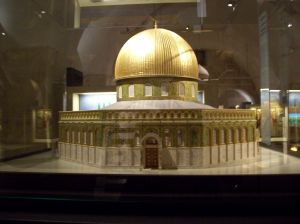 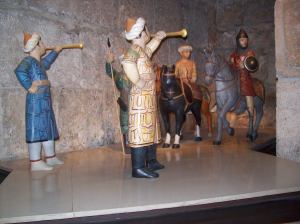 when the minaret was added,

and goes on to record the declaration made by General Allenby at the British capture of Jerusalem after the First World War. It was following this that a lot of the archeology was discovered, for example, the stones for the slingshot.. 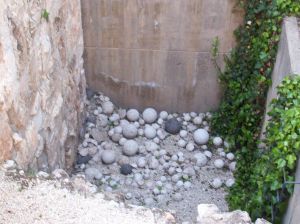 They are SO round!!

My feelings?  One of wonderment, and of being over awed.  Here was I staying in the Guest House at Christ Church opposite to Herod’s palace, sitting drinking coffee in a courtyard that was on the possible site of Herod’s lower palace, the place where Jesus was questioned.  The last days of His life was played out in and around these walls – boy!!!  I feel very small.

On another note, I actually did some crocheting last night and made my first little man……

A Christian Mum who crafts
View all posts by alisonb2 →
This entry was posted in Christian, crochet, Places and tagged crochet, Inspiration, Israel. Bookmark the permalink.